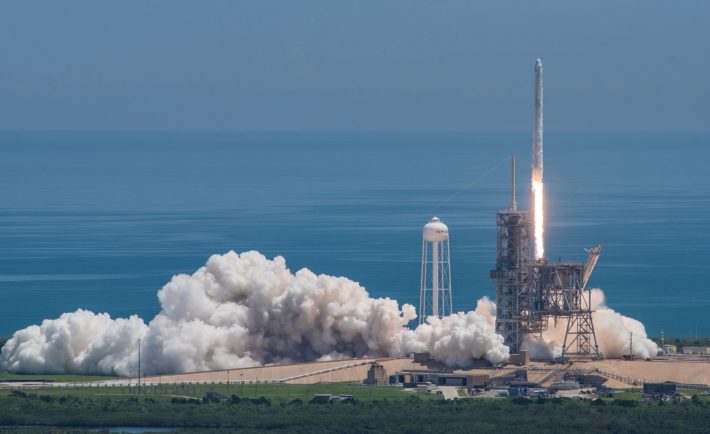 Elon Musk’s Space Exploration Technologies Corp. successfully launched another reused rocket from Kennedy Space Center in Florida as it continues its mission to drive down flight costs through refurbishment and reusability.

This Falcon 9 booster was first used for a cargo mission to the International Space Station in February. This marks SpaceX’s 18th rocket landing in the company’s history.

The launch carried a high-powered communications satellite for customers EchoStar Corp. and SES SA to geostationary transfer orbit.
The company’s main goal is to make spaceflight more accessible through reusability, bringing rockets back to Earth after multiple launches, refurbishing them and then launching again.

SpaceX is well on its way toward making this goal a reality. It only took the spaceflight company about 8 months to get the Falcon 9 rocket used tonight into good shape after its first launch and landing earlier this year.

The satellite sent into space is meant to improve high-definition and ultra-high-definition channel reception in North America. The feeds being bolstered have been used by thousands of radio stations, including Westwood One and ABC Radio.

SES Satellites has been one of SpaceX’s most-ardent backers, having been the first customer to hitch a ride on a previously launched rocket in March. At the time, Chief Technology Officer Martin Halliwell said the successful mission “made a little bit of history and opened the door to a whole new era of spaceflight.”

As its name suggests, EchoStar 105/SES-11 will be used by both the Colorado-based operator EchoStar and the Luxembourg company SES. The satellite will provide high-definition TV service throughout North America, the Caribbean and Hawaii, according to a SpaceX press kit.