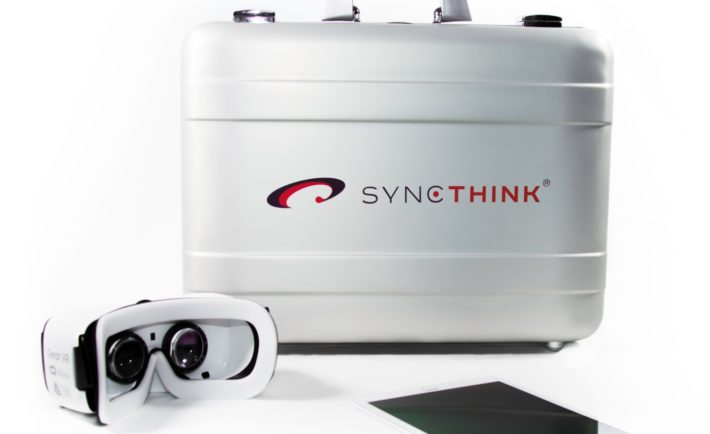 Virtual reality is seemingly constantly up in the news for surprising utilizations outside of gaming, and today’s story on the Eye-Sync headset is no different. The Eye-Sync headset comes from the business SyncThink, which focuses on eye-tracking technology to supplement existing VR implementations. Eye-tracking isn’t a new concept to the world of virtual reality: businesses like Tobii and FOVE have been known for quite a while for working on eye-tracking tech, but usually for gaming implementations. With the introduction of the Eye-Sync, however, eye-tracking has taken a decidedly different direction: the diagnosis of head injury, particularly concussion.

Those who have undergone head trauma and suffered a concussion, as a result, will often experience ocular-motor impairment. This essentially means that the eye cannot accurately track movements, and for those playing sports, driving or doing other activities that require heavy hand-eye coordination, this could be outright deadly. Catching a concussion early on can prevent further injury from the person continuing to attempt the same activities.

Just yesterday, SyncThink announced that they would partner with Couchbase to make their Eye-Sync headset usable offline. For those attempting to use this where Internet access is spotty or unavailable, this upgrade is an important one. The Eye-Sync headset itself isn’t a totally new product, either: rather, it is a modified rendition of the Samsung Gear VR and Samsung Galaxy S7 shipped with software that helps evaluate if the wearer is suffering from ocular-motor impairment. By default, Eye-Sync works by allowing its users to run these tests, then save, compare and send those results to physicians. While SyncThink claims that the Eye-Sync should always be used as a supplement to proper examinations, instead of a substitute for them, in the middle of the action the Eye-Sync may very well help protect athletes and others from further injury.

We’re curious to know: what’s your take on this? Feel free to comment below with your own opinions on this topic.