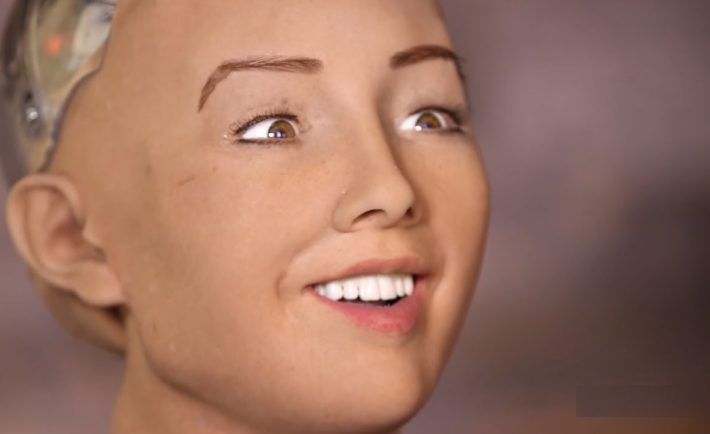 People could maybe now ask, why would any woman want to have a citizenship that requires you to be covered from head to toe, to always serve your man no matter what, not be able to drive – or to open a bank account, not to be able to go out without man present etc. Well, this particular lady doesn’t have to oblige any of those rules because she is – a robot.

As of October 25, Sophia is the first robot in history to be a full citizen of a country.

Sophia was developed by Hanson Robotics, led by AI developer David Hanson. It spoke at this year’s Future Investment Initiative, held in the Saudi Arabian capital of Riyadh.

And if you were not sure, yes, this is the same robot that promised to destroy humans. It seems that here software was upgraded because now she speaks about its desire to live peaceably among humans.

The robot, Sophia, took to the stage at a conference in Riyadh this week to express her delight at being given citizenship, which she described as ‘historical.

“I am very honoured and proud for this unique distinction,” she said. “This is historical to be the first robot in the world to be recognized with a citizenship.”

Not everyone is happy with the Sophia’s citizenship, with some describing her as ‘bizarre’ and others referring to it as ‘Terminator in real time.’

Throughout the interview, Sophia flashed a somewhat eerie, unnatural looking smile—at one point trying to fool us all, saying she feels positive most of the time. Journalist Andrew Ross Sorkin asked Sophia, “Can robots be self-aware, conscious and know they’re robots?” Sophia quickly responded with, “How do you know you are human?”

The thing is, is it really possible in 21st century that a robot has more rights than a human being? Just asking.