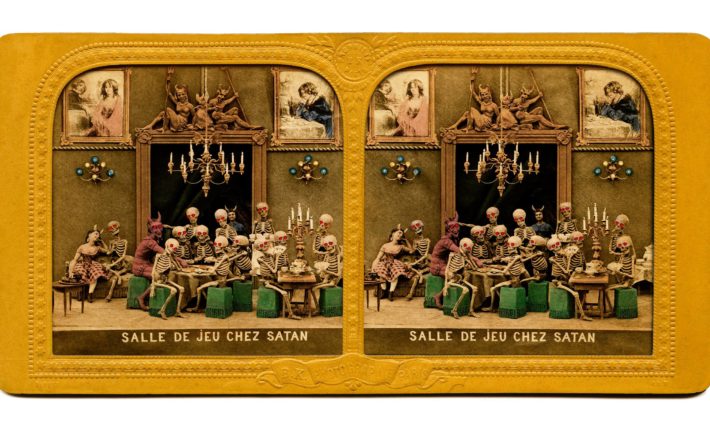 Guitarist Brian May is celebrating this years Halloween with launching the Diableries and The Diabl-O-Scope augmented reality apps, enabling users to explore the underworld whilst listening to Queen.

Diableries: Stereoscopic Adventures in Hell is a book published in 2013 with historians Paula Fleming and Denis Pellerin. The book was a tribute to Les Diableries,a series of 3D stereoscopic cards published in Paris in the 1860s. The cards depicted scenes of daily life in Hell, starring a series of devils, satyrs and skeletons. The app was developed by May alongside the London Stereoscopic Society and animation company Unanico.

As May explained, the ghoulish images that appear in the book are stereoscopic photographs dating back as far as 1859. Each scene features models constructed with wire and clay and various props that, viewed together with a second image, trick the eye into perceiving depth and realism. The reader is taken on a dark journey to a fantastic imaginary underworld of devils, satyrs and skeletons. Brian and his coauthors explore the magic stereo photography and the meaning of the image on each card is interpreted.

The guitar hero explained that he began collecting diablery cards as a young student when he first came across them in an antiques market off the Portobello Road.

May isn’t new when talking about AR and VR. Two years ago he launched the OWL Virtual Reality Kit, a Virtual Reality and 3-D stereo image viewer that brings all the excitement of VR within reach of anyone with a smart phone.

He thinks that virtual reality has already taken the technology world by storm, and most of the virtual reality devices you’ll find will be things that surround your eyes, like the Google Cardboard thing, like the Oculus Rift. “That’s how people thought this particular reproduction of virtual reality should be experienced. But people get fatigued quickly from these things, and they get annoyed because they can’t reach in to get to their phone controls. I quickly realized the OWL was in some ways a better way of viewing virtual reality.”

Both Diableries and Diabl-O-Scope are available from Apple’s App Store.