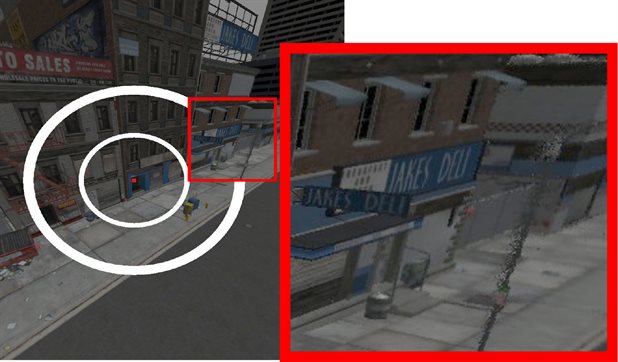 European researchers today announced a display technique that may help many virtual reality users avoid nausea, one of the most common symptoms of “virtual reality sickness.”

Virtual reality sickness, which often causes symptoms similar to motion sickness, can result from latency between eye movement and displayed changes in the VR environment. Often, there is a trade-off when using higher resolution images in VR: although they improve realism, they also increase computational processing demands, which can increase nausea-inducing latency.

These latest findings by researchers at Brunel University London, and the Bonn-Rhein-Sieg University of Applied Sciences and Saarland University in Germany, builds upon a technique called “foveated rendering.”

In typical human eyes, our central vision is sharper than our peripheral vision, a fact that can be leveraged to ease processing demands when displaying VR environments.

“We use a method where, in the VR image, detail reduces from the user’s point of regard to the visual periphery,” explained Thorsten Roth, one of the researchers located at Brunel University London. “And then our algorithm…incorporates a process called reprojection.”

The researchers discovered that, with their technique, they only had to maintain a sharp image in a medium-sized “foveal region”: using an inner radius of 10° and outer radius of 20° around the centre of vision. Surprisingly, not only was any additional sharpness redundant, but in some cases even resulted in study participants reporting a lower-quality perceived image.

“We showed that it’s not possible for users to make a reliable differentiation between our optimised rendering approach and full ray tracing, as long as the foveal region is at least medium-sized,” explained Roth.

Summarizing his team’s findings, Roth said: “Our method can be used to generate visually pleasant VR results at high update rates. This paves the way to delivering a real-seeming VR experience while reducing the likelihood you’ll feel queasy.”