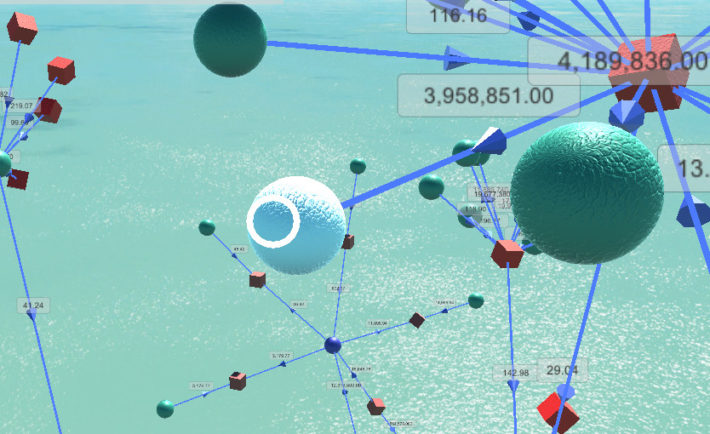 In the world of virtual reality, everything (well, almost everything) can be perceived and understood better. Same goes with cryptocurrencies. Bitcoin can definitely be hard to imagine, as it’s not physical asset. Even if you are familiar with the way blockchain works, it is still hard to put it in the real picture. Usual graphs and charts make the life even more miserable, so somebody actually discovered more evocative way of depicting bitcoin. We are presenting you – Blockchain 3D Explorer.

Kevin Small has created a blockchain explorer that enables anyone to view the bitcoin blockchain in 3D or VR. The British developer is planning to take his creation to London’s Blockchain Summit on November 28.

So, by downloading it, you can actually visualise flows of Bitcoins as they flow from address to transaction to address to transaction on and on. By clicking on transactions (the blue/green spheres) or addresses (the red cubes) more and more of the network can be displayed, and you can trace the movement of funds backwards and forwards in time.

VR provides stunning, immersive, visualisations that takes you inside the blockchain. The network flow can be displayed with an overlay to show details of the nodes in the network, so amounts, ids, dates and so on can be displayed.

Although the explorer is still being perfected, a working model is already up and running. It allows data detectives to zero in on a specific address and trace the flow of bitcoins as they move along the blockchain.

“It’s just like being there… you feel like you can reach out and touch the flows” said one of the VR Beta Testers.

With the current release, blockchain3d.info supports Google Cardboard on Android (devices from 2015 onwards).