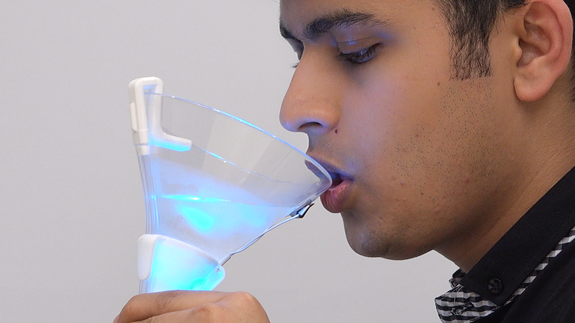 Researchers at the National University of Singapore have designed an intelligent cocktail glass which is capable of tricking your senses into thinking that the water you’re drinking is actually whatever you want to drink in the moment. Whether it is tea, cola, wine or beer – this invention by Nimesha Ranasinghe could make it happen.

The Vocktail, short for virtual cocktail, sits in a 3D-printed structure, which holds three scent cartridges and three micro airpumps. These release “smell molecules” that should change the drinker’s perception of the flavour of the beverage. For example, a lemon scent will be pumped out for a lemonade drink.

An LED at the bottom of the Vocktail will also flash a colour, which is fully customisable. The colour can be one that corresponds to the colour of the drink, so you could pick a dark red for red wine.

All these features are controlled by a phone app, which allow users to customise the drink accordingly to their needs.

Ranasinghe’s research work at the National University of Singapore includes experimenting with electrical signals and how they can affect the sense of taste. By modulating electrical flow, he can make the tongue sense specific flavors. Ranasinghe has also created TasteXML, a markup language for flavor, and Taste over IP, a protocol for sending taste via the internet.