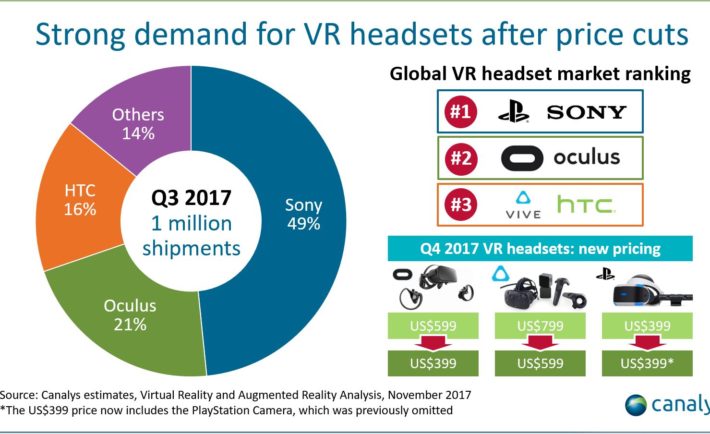 Uptake of virtual reality hardware continues its upward trend, according to the latest numbers from independent market analysis firm, Canalys.

In a report issued Monday, the company indicated that total global shipments of VR headsets set a new milestone, exceeding one million units during the just completed 3rd quarter. Meanwhile, Sony, Oculus, and HTC continue to dominate the VR hardware marketplace, with an 86% combined market share.

One driver of headset acquisitions was a temporary-turned-permanent price cut by Oculus in Q3, who matched Playstation’s VR headset price point at $399. This precedes the upcoming release of Oculus’ $199 Go standalone headset, expected next year.

“Sony has dominated the Japanese VR headset market since the release of the PS VR, taking more than an 80% share, and will continue to lead as it increases supply of the PS VR headset with bundles featuring new titles from popular franchises, including Doom, Skyrim and Gran Turismo.”

“VR in business can be applied to many industries, such as manufacturing, healthcare and education,” said Low.

“As top-tier PC vendors, including HP, Lenovo, Acer, Asus and Dell, launch their own VR headsets, using their distribution channel efficiencies, one can expect a strong VR uptake in business.”