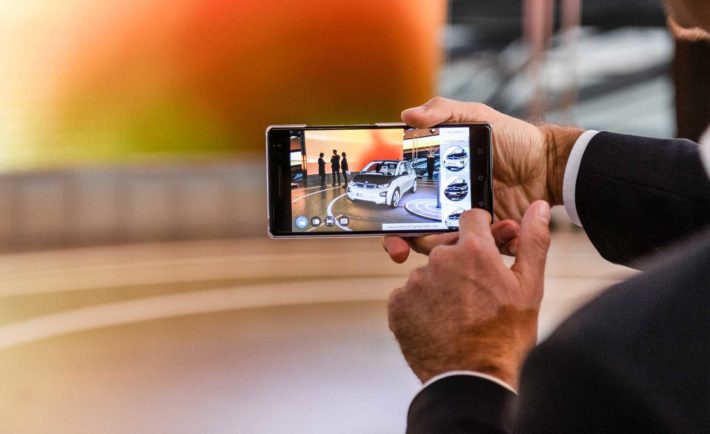 BMW is first brand to offer a configurator through Apple’s Augmented Reality app using ARKit with iOS 11. The BMW i Visualizer app allows you in that way, to select and customize a life-sized version of the BMW i3, i3s, or i8 car while in any location.

Now customers in select markets can use their iPads and iPhones to to view real-size 3D renderings of BMW i cars like the i3 and i8. While the app is available in 17 countries already, there’s support for over 21 languages offered through it.

“Our products are highly emotional vehicles which customers need to experience,” said Andrea Castronovo, BMW Group Vice President, Customer Centric Sales Strategy, MPM & Process Management. “With this app, we’re able to bring the next best thing to an actual product into people’s pockets – they can just take out their iPhone and see what their dream car would look like on the driveway or how it would fit into their garage,” he added.

Just for a reminder, last month BMW became first company to experiment with Snapchat’s AR ads.  In an attempt to turn things around, Snapchat is turning to augmented reality advertisements. The first of these AR ads will come courtesy of BMW. In the case of BMW’s new X2, the app will project an image of the car into the world around you. Users will be able to walk around the car and tap it to change its paint job.

There are several automakers who are seeing a potential for augmented reality to complement their retail experience with the ability to see a vehicle virtually anywhere and explore it in detail while being able to change its configuration at the touch of a screen. For example, we saw some early examples of this kind of functionality soon after ARKit was first announced, most notably in the form of a virtual Tesla created by an independent developer. But this is a real application of ARKit produced by a major automaker, and it seems BMW is, once again, ahead of them.