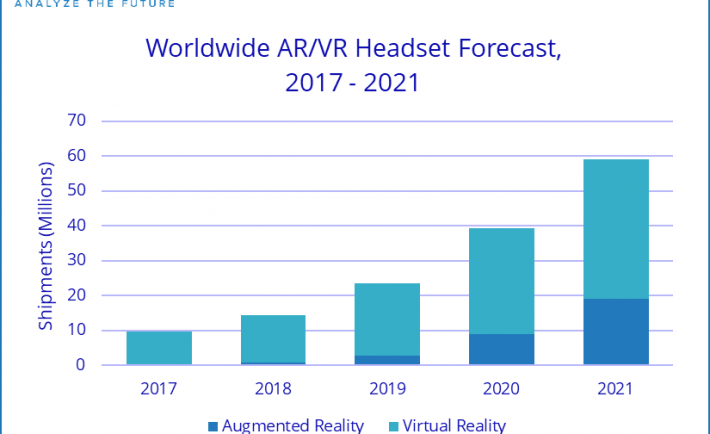 The firm notes that low-cost, screenless VR viewers (e.g. headsets that utilize smartphones) have dominated the market to date, but sees this category losing market share going forward, with a shift into tethered and standalone VR/AR solutions.

According to their report, screenless viewers will represent less than 15% of the total VR/AR market in 2021, with tethered and standalone headsets moving into top market share spots.

“The VR market, young as it is, is in the midst of a crucial transition as buyers are gravitating towards tethered headset and PC or game console bundles that offer advanced tracking and higher fidelity rather than settling for low-cost headset and smartphone bundles,” said Jitesh Ubrani, senior research analyst for IDC’s Mobile Device Trackers.

“This bodes well for the entire VR ecosystem as the improved experience of a dedicated device draws a more dedicated audience.”

“We have long believed that AR headsets will play a fundamental role in changing the way many companies do business,” said Ryan Reith, program vice president with IDC’s Worldwide Quarterly Mobile Device Trackers.

“AR will introduce technology to a large portion of the work force that was never able to benefit from technological advances because of the need to use their hands to complete their job functionality,” he said.