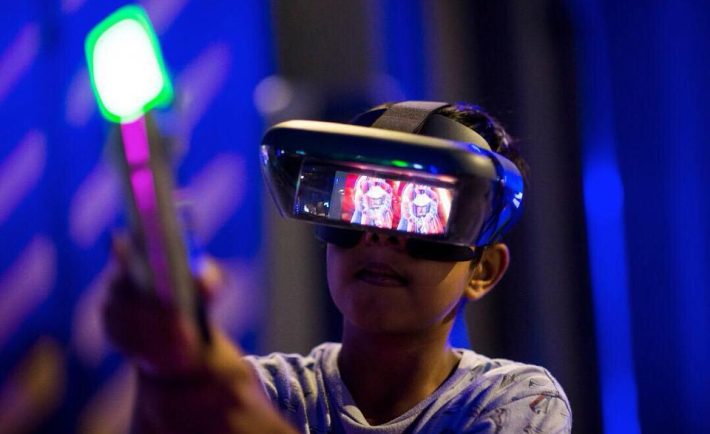 The Rift is an AR/VR Adventure Park, based in Malaysia. It’s a large, indoors area offering all kinds of different augmented reality and virtual reality installations, from basic VR gaming installations to things a little more advanced. For instance, an AR rock-climbing game and Zero Latency, a free-roaming VR shooter.

What’s on offer at The Rift may be reminiscent of a VR arcade (like the one I interviewed an owner in), and it even offers a few standard arcade titles. Where it sets itself apart is in its sheer size and number of attractions, many of which utilize different AR and VR technologies. There’s a lot of different technologies being utilized and displayed here, not just VR.

Because of this, simplifying The Rift to a “VR arcade” doesn’t seem appropriate, despite its similarities to one. Instead, I’d say that The Rift sets the standard for what VRcades and ARcades of the future will look like: full-blown indoor parks, powered by cutting-edge tech, where anything is possible.

The Rift is set inside the Mid Valley Megamall, which is located in Kuala Lumpur, Malaysia. Whether as a tourist attraction or a place for locals to hang out, The Rift is sure to draw a lot of attention once it officially opens in January 2018.

If you’re interested in checking out The Rift as it opens, click here to head to their web page. If you’ve already been to The Rift or a place like it, feel free to comment below and let us know about your experience! We’d love to hear from you.