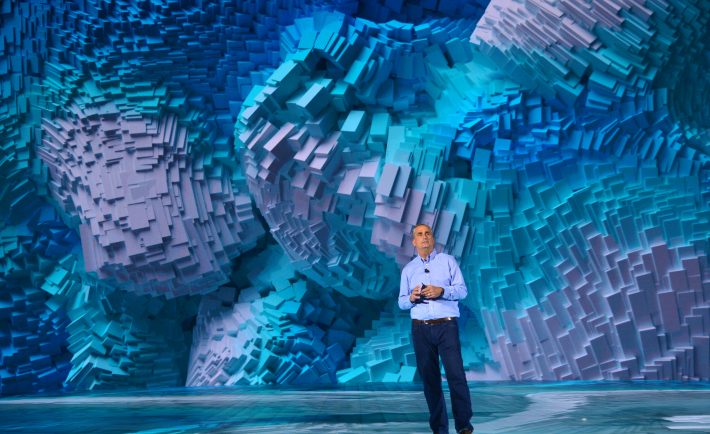 Brian Krzanich, Intel Corporation chief executive officer, offers a presentation during a rehearsal for the opening keynote at the 2018 Consumer Electronics Show (CES) on Monday, Jan. 8, 2018, in Las Vegas. Intel displays how the power of data is affecting our daily lives at the event, which runs Jan. 9-12. (Credit: Walden Kirsch/Intel Corporation)

Intel CEO Brian Krzanich used Monday’s CES 2018 keynote to highlight how data is changing our work and personal lives, while simultaneously pushing forward technological innovation both at his company and within the larger technology sector. His keynote also specifically addressed Intel’s new initiatives in the VR space.

“Data is going to introduce social and economic changes that we see perhaps once or twice in a century,” Krzanich said.

“We not only find data everywhere today, but it will be the creative force behind the innovations of the future. Data is going to redefine how we experience life – in our work, in our homes, how we travel, and how we enjoy sports and entertainment,” he continued.

The keynote heralded an array of new partnerships involving Intel and major players in the automotive and AI spaces.

On the AI front, the company continues research into “neuromorphic computing,” a next-generation approach to mimicking the human brain’s observation, learning and understanding. Intel is also furthering development of a quantum computing system in partnership with QuTech.

Expanded partnerships in autonomous driving were announced involving BMW, Nissan and Volkswagen along with new mapping partnerships with SAIC Motor and NavInfo in the Chinese market. Also announced was an AI partnership with Ferrari North America for racetrack insights.

However, the most visible results for consumers may come from the VR space, including a new partnership with Paramount Pictures. Krzanich took the keynote opportunity to introduce Intel Studios, billed as a “state-of-the-art studio dedicated to the production of large-scale, volumetric content.”

Built around Intel’s True View technology, the new studio boasts the world’s largest volumetric video stage. This, combined with the studio’s post-production and control systems, will empower studios to increase realism and go even further in developing immersive experiences.

On the sports front, “Intel’s True VR technology will see major use in the upcoming PyeongChang 2018 Olympic Winter Games, Krzanich said, setting the stage for continued growth of 360 degree and VR content for viewers globally, while leveraging emerging 5G technologies.

In partnership with broadcasting rights holders, Intel will capture 30 Olympic events, enabling both live and on-demand VR content. Viewers in the US will be able to utilize a forthcoming NBC Sports VR app to access live virtual reality broadcasts.

“If you are impressed by what you see at CES this week, stay tuned,” Krzanich stated in his closing remarks.

“We are still discovering new ways to apply the power of AI and data. These discoveries will impact nearly every sector of innovation, and Intel is at the forefront of this revolution, bringing to life the promise of data-driven experiences through autonomous driving, AI, 5G and VR,” he said.