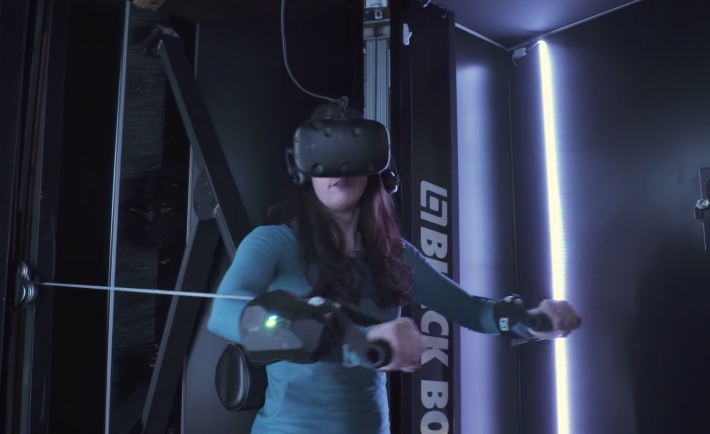 Photo by The Verge (video frame)

Exercise and weight loss has always been a prominent part of virtual reality. In fact, the health-seeking mission started even earlier, with games like DDR and consoles like the Wii. The gaming industry has always been searching for an exercise stimulating solution with occasional success stories, like the one of Job Stauffer, then-Telltale Games employee, who lost 50 pounds playing a VR game.

So it isn’t surprising to see VR industry “work-out” (pun intended) innovations in the fitness space as well. A Boise-based company Black Box, started by Ryan DeLuca and Preston Lewis, is attempting to disrupt the way you exercise. The duo has created Black Box VR — the first immersive virtual reality gym experience, which is powered by unique wearable motion controllers and an HTC Vive.

The place where Black Box VR sets itself apart from other virtual reality fitness games is by adding actual weight resistance to its controls. This means instead of just cardio, you may actually start building real muscle, all while playing games. If you’re also able to use normal Vive motion controllers to play other VR games (like, say, Soundboxing), these Black Boxes may well become the ultimate way to get fit in virtual reality — for real.

While it is possible we are going to see the “Box” released later this year, the exact date isn’t yet known. In the meantime, the company is gaining its momentum in the highly competitive fitness landscape.