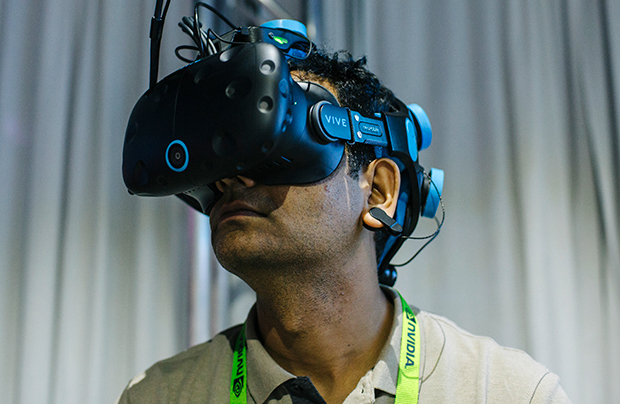 Boston-based startup Neurable will bring its brain-controlled VR video game Awakening, which the company claims is the first of its kind, to VR arcades around the world by the end of this year.

This brain-computer interface (BCI) is made possible by the attachment of an HTC Vive VR headset to a brain-scanning headband equipped with electrodes that pick up neural activity by recording electroencephalography (EEG) signals. When the gamer focuses his gaze on an object in the game, Neurable’s machine learning software recognizes the resulting changes in the EEG signal and turns this into a game command, selecting that object for use.

For this to work, the gamer goes through a training process before playing–though it is actually Neurable’s software that must be trained, as it has to learn what pattern of neuronal firing–as depicted on the EEG–indicates that the gamer is concentrating on a specific object. This pattern is known as an event-related potential (ERP), essentially the summed firing of many neighboring neurons.

For now, the process of getting through Awakening’s dystopian world does not get much more complex than moving one’s attention from one item to another. The gamer plays as a child trapped in a government laboratory, and must “pick up” various toys and other objects by focusing on them, at which point the objects are thrown around to reveal clues and facilitate the escape.

The company presented its technology for the first time at last year’s ACM SIGGRAPH, having many people experience the technology for themselves. Here is what it looked and felt like to those who tested the device:

The story line is quite simple because Awakening serves as a demonstration of Neurable’s BCI technology rather than an actual video game with a narrative. In an interview with Eliza Strickland of IEEE Spectrum, Neurable cofounder and CEO Ramses Alcaide said, “We’re not game designers; we don’t know how to lead players through these environments.” For this reason the company released a developer’s kit that game designers can take advantage of with their own creations. But even if their tech isn’t finding quick adoption in the gaming niche, the company has no reason to get worried. According to Alcaide, VR games are only the first application of Neurable’s technology.

Further research and development is needed to increase the complexity of Awakening, such as making it possible to move objects at the gamer’s discretion after selection. Its creators also intend to make the brain-monitoring technology more compact, with fewer electrodes on the headband and eventually a single EEG sensor tucked away in an earbud.