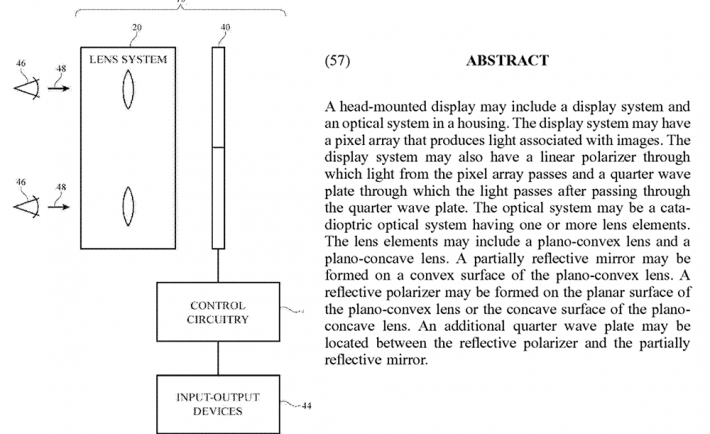 The patent describes an “Optical System for Head-mounted Display” intended to make VR headgear more comfortable. In the application, Apple notes that VR headsets can be “cumbersome and tiring to wear” due to “bulky and heavy” lens arrangements. VR devices typically use microdisplays, requiring high magnification of visual content and thus thicker lenses between the display and the wearer’s eyes. Currently, many popular headsets overcome this issue by using Fresnel lenses–a type of grooved concentric lens whose jagged edge allows it to be thinner than conventional lenses.

Apple’s patent application proposes an alternative solution in the form of a catadioptric optical system, often found in telescopes and microscopes. This system focuses light from a display in a compact manner by having it bounce back and forth along its optical path through a process involving both reflection and refraction, using lenses as well as mirrors.

Whether Apple intends to model the actual headset after eyeglasses, goggles, a helmet, or something else entirely is not made clear. As far as accompanying input-output devices, Apple makes no specific promises, but mentions quite a few potential devices, including joysticks, track pads, cameras, and a variety of sensor options–examples include temperature sensors, accelerometers, and proximity sensors.