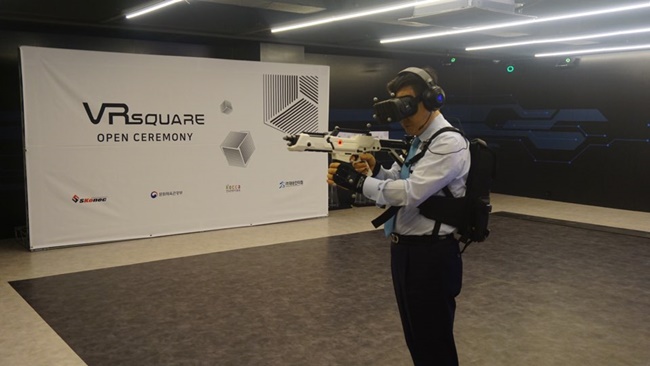 In Seoul, South Korea, a new VR theme park is opening. It’s called VR Square. We’ve covered a great number of stories concerning VR parks, but what sets VR Square apart is that this one is smack-dab in Seoul- its Hongdae neighborhood, in particular. The South Korean Ministry of Culture, Sports, and Tourism and the Korea Creative Content Agency are responsible for making this project happen, likely in hopes of drawing people from all over the world to their VR facilities.

VR Square has a lot to offer, from basic VR headset setups to full room-scale experiences like the one seen in the featured image of this article. As we hear more about VR arcades and theme parks and such opening around the world, we should rejoice: these serve as locations for people to experience the potential of VR without needing to invest hundreds of dollars in compatible hardware and headsets. Feel free to look at the video above for more information, but warning: it isn’t in English.

VR Square should help convert many South Koreans (and tourists) into believers in VR. Other parks around the world, like The Rift in Malaysia, will also help VR grow in the consumer consciousness. VR arcades are even more frequent around the world- I recently interviewed the owner of a local one myself.

Comment below and let us know: do you think VR parks and arcades are helping boost VR’s reach?